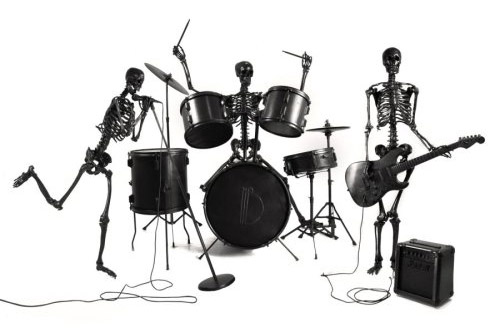 If you're a worship leader these days, the chances of you starting out in a "band" is a good possibility. More than likely, it was a small, 4 piece band jamming out to the latest hits and possibly some originals that you probably look back and cringe at....if you're like me. The band background has really turned out to be a plus for today's worship leaders. For one, the majority of styles and songs coming out tend to that kind of sound and setting. Also, pastor's are now looking for worship leaders who have been in a band, because they already know how to run a modern worship team...

...and that's what the modern worship team commonly looks like - a band.

There's so many cool things that come with a typical band, and the main benefit of it is the size. Your typical band is always small.

Worship teams have decreased in size dramatically over the last 20-30 years in churches. It peaked out with the concept of choir and orchestra, which when it's done well, sounds awesome. Then it went down to the concept of having a band and 4 to 10 singers on the stage at the same time, which is also known as an ensemble. Hillsong and Maranatha really modeled that well. Slowly, but surely, we've seen it simplify down to a band, which is 4-6 instruments, a lead singer and a background vocalist or two.

Don't get me wrong. I'm not at all suggesting that the band concept is the only acceptable method in church music, but I definitely see the benefits of it.

...QUALITY - Generally speaking, when you have less musicians/vocalists on the stage, the quality will naturally be better. It's less to mix for the sound tech and it's always a tighter performance from the stage. In short, it's easier to manage.

...COMMUNITY - When you have a small band that plays together regularly, you see relationships and bonds form, because it's basically a small group. The circle is tighter, therefore people get closer.


Who wouldn't want to have these benefits?

What church leader or worship leader wouldn't want these attributes in their worship team?

The only thing is there's a huge difference between a BAND and a WORSHIP TEAM.


The difference can be defined with one word: CHURCH


A band is all about performing for people.

A worship team is all about serving the church and pointing people to God.

A band has the privilege of being static and having the same musicians/vocalists for every show.

A worship team needs to have an inclusive heart and mindset, especially the bigger the church becomes.


So...how does a worship team keep the benefits of QUALITY and COMMUNITY and still stay inclusive? How does a true worship team stay small?

1. AUDITION - One thing I've learned is that you should be inclusive, but you should not be all-inclusive. Not everyone is meant to play an instrument or sing. Auditions give you the opportunity to determine that. Great leaders place people in areas of their giftedness, as much as possible. Worship leaders that don't audition are usually afraid to say no and end up doing their church, worship team and even the person auditioning a huge disservice. Remember that it's a lot harder to ask someone to leave a team than it is to give an initial "no". Auditions allow a worship team to stay as small as possible and have a standard of quality. Auditions can negatively affect people at times, but they will always be positive for a church, if done correctly, of course. It's ok to pursue excellence, musically. Psalm 33:3 says, "Sing to Him a new song; Play skillfully with a shout of joy."

2. ROTATION - As a worship leader, I've developed a huge, non-negotiable philosophy. That philosophy is "ROTATION, ROTATION, ROTATION." The church is people. At the end of the day, the church is for people to connect to God and each other. Remember that it's a band concept, but it's not a band. It's a worship team, and really, when you get down to it, it's the CHURCH. I Corinthians 12 talks about the church being many members, but one body. As a worship team, we are the Church. If you don't have a rotation or opportunity for one, you're being exclusive. You're enabling the members of the team to become territorial of the position that they're filling. The positives of a rotation waaaaay out number the negatives. The obvious challenge is that your team changes regularly. The positive is that more people are using their gifts and serving the church. Another challenge is keeping the quality the same weekly. The positive is the superior players will challenge the inferior, and with time, everyone's "game" will improve. The obvious HUGE positive is the more positions rotate, the stronger the positions become. It's an incredibly strong benefit for the leader and ultimately the church when no one position is dependent on any one person. Rotation makes everything stronger and really prevents burn out like nothing else can. Rotation also allows a big team to stay small each week, thus keeping the benefits of a small team while encouraging healthy growth. You may be in a situation where you don't have the luxury or the people to facilitate a rotation. That's ok. You can and should instill a non-territorial heart into your current team right now. The way you do that is by simply vision casting and keeping the idea in front of them. Make sure they know and embrace that one day they'll probably share their spot. This will allow you to make the changes in the future with little resistance and no surprises. A cool sub-point to this would be HUMILITY. It takes humility for team members to truly embrace the idea of rotation. Pride will cause musicians and vocalists to become territorial. It will hurt your team and destroy the territorial member, if burnout doesn't first. Rotation will keep your team small numerically, but it will also be a great reminder that we are all just a small part of the Kingdom work of a BIG GOD.

3. RELATION - As worship leaders, we need to make it a goal to get to know our team members more and more. Get into people's lives and be an encouragement. That will bring so much more chemistry, even to the music side of things. In John 13, Jesus commands us to love one another. Relationships are what fuel us to get together as a church and it can be an amazing advantage as a worship team. It takes you beyond Sundays and into the week. You will not only play together, but you will eventually pray together and for each other. It essentially becomes another small group in your church if relationships exist. If you can relate with each other, outside of music, then something happens. A closeness...a tightness happens. It becomes smaller in a good and healthy way. The larger a team becomes, the more vital it is to be intentional about relationships, because it becomes more and more of a challenge. Even if you're small now, make sure to facilitate times of community within your team that can properly encourage relationships as you grow numerically.

Think about the greatest bands like The Beatles, U2, Coldplay, etc. They're simple 4 piece bands that have changed music. A friend of mine saw The Police a few years ago. They're a 3 piece band and he said it's the best, fullest sound he had ever heard live. These bands have made a tremendous impact on culture. Just a few guys with just a few instruments.

Again, I'm not suggesting that a 4-6 piece band is the only way to go. You may have an amazing worship team that's much bigger than that. That's great! If it works for your church, go with it! Just remember to pursue a closeness and tightness with them...the people...the Church. Make it as small as possible, relationally. Keeping your team small can sometimes be a big task, but it's worth the effort, and sometimes the fight. It's easy to lose sight of the details, the bigger your scope becomes. Make sure to stay as small as you can, not only for your benefit, but for the benefit of your church.

A small worship team can make a tremendous impact.

Good stuff, Gary --- I used a smaller band this past week, partly for simplicty (I confess, after leading/hosting "Refuge Retreat", I needed an easy button) ... but also, it was out of necessity due to a lot of cancels. On the other hand, for rotation (which I agree, is critical) to work, there needs to be some frequency in how often people are rotated. Singing 1x every 2 months is not very beneficial to anyone. We have a large roster of musicians and singers, so for the rotation to work and keep people involved at least 1-2x per month, I almost HAVE to have a bigger band.

Now, that adds a completely different topic, but one that warrants discussion ... who says that everyone on stage HAS to be in the mix. If sonic quality is a concern, people can still lead and play w/o having to necessarily be heard. Now, that sounds crazy --- but, there's something to it. I think I'll blog about it!

Great stuff bro. Completely agree>
while I know that having 43 guitar players on stage with only 3 plugged in is the best way to usher in the Holy Spirit I believe there is huge freedom in a small band.

A small tightly knit team gives you more creative freedom. Less of a chance on stepping on toes musically. Less of a headache in arrangements and most of all much easier to flow in the spirit into an unplanned area

We have a small band with rotation.

Generally we have acoustic, electric, piano, bass, drums plus one or two singers. 6-7 people would be a typical setup for us. We make it a point to rotate people through so we never create a "band" sound but instead create a Compass (our church) sound. We want people to know what they should expect on Sunday and never feel like "I like/don't like when that band plays on Sunday."

Chris...that's great! I love that it's about the church. I remind my members that we're a church, not a band.

Good points. Our overall worship ministry is large, so we use rotation a lot, and keep each team small. It also helps that we have four campuses.

We generally use three vocalists at a time, per service/campus (sometimes two -- and once or twice a year, four). Usually one or two of those vocalists will play acoustic guitar, and maybe one or two will play electric or keyboard. Then we add the rest of the band, so we typically end up with a couple guitars, drums, bass, keys. On occasion we may have another instrument, like sax, cello or banjo.

A few times a year one of our campuses will go with a "large band" set -- typically about 8 musicians plus the vocalists. But most weeks, each campus/service worship team has a total of 5-7 people.