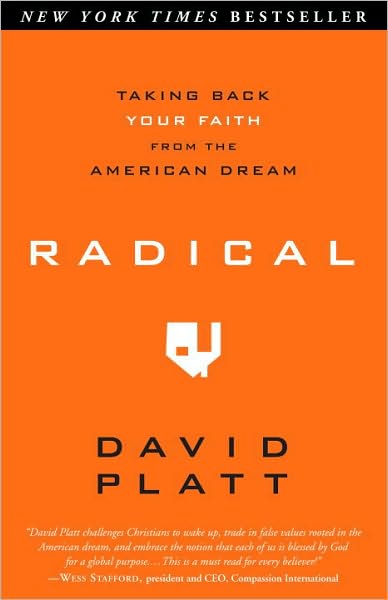 RADICAL by David Platt
David Platt quotes James Truslow Adams, who said in 1931, speaking of the American dream, "a dream...in which each man and each woman shall be able to attain to the fullest stature of which they are innately capable, and be recognized by others for what they are."
I'll never forget the first time I heard someone talk negatively about the "American Dream." It was a little over ten years ago. It was a guy named John Piper ranting and rebuking the idea of living a life that only benefits myself. He scolded us for getting sucked into the "American Dream." I've never been the same, since I heard that message.
In his book, Radical, David Platt carries the torch and responsibility of reminding us that the "American Dream" isn't all it's cracked up to be...oh, and by the way, it's not God's plan for our life.
Near the beginning of the book he says, "While Christians choose to spend their lives fulfilling the American dream instead of giving their lives to proclaiming the kingdom of God, literally billions in need of the gospel remain in the dark."
What I love about this book is the lack of arrogance from the author. It's not condemning. It's questioning our motives and challenging us to live out the great commission and ultimately experience the full Kingdom life in Christ.
With that being said, he definitely doesn't shy away from what some would think would be bold statements. For instance he says, "Regardless of what we say or sing or study on Sunday morning, rich people who neglect the poor are not the people of God."
He later goes on to ask the all too important perspective question of "What is rich?" He says, "If we make only ten thousand dollars a year, we are wealthier than 84 percent of the world, and if we make fifty thousand dollars a year, we are wealthier than 99 percent of the world." It's important to extend our scope beyond our own surroundings and look at how the rest of the world lives. This gives us true perspective, instead of living in subjective ignorance our entire lives.
He goes on to say, "The purpose of our lives transcends the country and culture in which we live. Meaning is found in community, not individualism; joy is found in generosity, not materialism; and truth is found in Christ, not universalism."
He ends the book very responsibly. It's one thing to criticize, but criticism is only helpful if there is a solution. After he spends most of the book challenging our process, he ends by giving us some simple and practical ways to change our course and ultimately change lives for sake of the gospel.
I would highly recommend this book to any Christian. Not everyone will love this book or enjoy this book, but I think that's the point. We need to be shaken and broken for the Kingdom of God and stop living for things that are not eternal.

I just happened to read some other reviews on this book on Amazon yesterday. Weird. Thanks for your input!