Book Review - When the Game was Ours 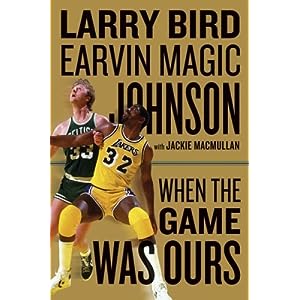 Wben the Game was Ours by Larry Bird, Earvin Johnson, & Jackie MacMullan

From a very early age I have been a die-hard Boston Celtic fan. The main reason for that was Larry Bird. As a young kid, I remember watching the rivalry of Larry Bird & Magic Johnson unfolding and changing the game of basketball right before our very eyes in 80's. It was simply epic. There hasn't been a rivalry like it since.
So, when I heard this book was coming out, I was pumped. This is the first tell all book about the rivalry and relationship of these two superstars. On one side you have the "hick from French Lick", Larry Bird, who hates doing interviews, and hates drawing attention to himself. On the other side, you have "Showtime", Magic Johnson, with the million dollar smile, living it up in Hollywood and a sucker for the spotlight. When you strip all these attributes away, you see two individuals with similar skills in the game of basketball. Simply put, they seemed immortal on the basketball court and were very evenly matched.
This book gives a ton of insight and behind-the-scene looks into the NBA world in the late 70's and throughout the 80's. The Celtics/Lakers rivalry was red hot and the Magic/Larry rivalry revitalized the NBA and set the stage for Michael Jordan to take the league to new heights. It's an amazing story of two complex individuals who made basketball history by pushing each other, competitively, to new heights and set the new high standard for teams to chase in the NBA.
Basically, this book was a dream for me, and I was actually kind of sad to read the last page. If you're an avid NBA fan, especially one for the past 20-30 years, this book will be right up your alley.