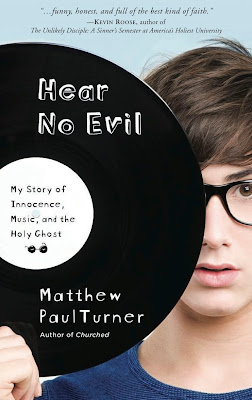 Hear No Evil by Matthew Paul Turner
It was the summer of ‘92, Garth Brooks made my friends and I all instant country music fans and the speaker at our youth church camp had a new agenda. His mission was to convict our hearts of the evil secular music that had invaded our lives. He capped it all off by telling us to take our secular CD’s, including “Barf Brooks”, and destroy them like Christian soldiers crushing the enemy. All of the kids in my youth group made the “decision” to give up their secular music. You see, making decisions was the pinnacle of the whole camp experience. In the midst of all the revival and purification of non-Christian music, I was the only one that just didn’t quite get the conviction of the holy speaker. Slowly, each member of the youth group discovered my rebellion and one-by-one came to me, some in tears, pleading me to give up my devil music. But I stood my ground. A couple days after getting back from camp, our youth director held a CD smashing event. Everyone, except for me, brought their Brooks & Dunn, Garth Brooks and Billy Ray Cyrus CD’s and destroyed them from the heart. Here’s the problem: Within months of that revival, most of those people purchased the same CD’s again. The idea of breaking a CD to acquire holiness was a flawed attempt. It goes much deeper than that. The churches I grew up in all shared that common denominator of drawing closer to God by way of rules and regulations. I think that is why I love reading the accounts of Matthew Paul Turner’s upbringing in the church. I relate so closely to them, and combined with his sarcastic humor, it leaves me laughing out loud as I read, which is a rare thing when it comes to books and myself.

I think you can accurately label this a sequel to his previous book called Churched, which covers MPT‘s elementary years in the church. Click here to read my review on that. In Hear No Evil, he recounts his teen, college and adult years. The reader gets a very humorous look at a student really experiencing life outside of the bubble of the legalistic Independent Baptist Church. He says, “I learned quickly that what we believed as Baptists trumped anything God told me. The things he said didn’t count unless they were included in my church’s statement of faith.” This is a mindset I totally understand and have experienced, myself. I really related to him when he said, “I didn’t study God. I just memorized Scripture verses and practiced Bible trivia.”

The main, underlying theme of this book is his journey through music. Like myself, the only music he was exposed to growing up was either hymns or southern gospel music. He says, “…for a young Independent Fundamental Baptist, few things existed that were more frightful than a syncopated beat.” I remember growing up hearing my pastors all saying that there was no such thing as “Christian rock”, and they would all use air quotes when they said it. The whole CCM movement scared and threatened the old regime, and they went into attack mode.
MPT takes us from high school experiences to college where his eyes were opened to different kinds of music and cultures. I felt his hesitancy and judgmental nature that surfaced as he encountered different ideas and beliefs that didn’t match up with the doctrine that his church had given him. He says, “We could be passive-aggressive toward our parents and our past lives without being considered unchristian. Reformed doctrine offered a different way to think about God. And sometimes different, even when it really isn’t that different, is all we need to make us feel alive, creative, and in control of our own destiny.“ The book takes us to his present time and shows us his fresh, more balanced understanding of grace. He gives us a glimpse into the ugly truths of the CCM world that appears sometimes too perfect. As editor of the once popular CCM Magazine, he recounts the hypocrisies and lack of grace that exists in the Christian music industry. This takes us to a very moving encounter he had with Amy Grant, who has experienced such judgment and condemnation from people who claim the name of Christ, which is possibly the greatest oxymoron we know.

Like Churched, I would only recommend this book to people who are not ultra-conservative. Unlike Churched, I saw more nuggets of spirituality that one could benefit from. If you’ve grown up in a very legalistic church or family, you will definitely be able to relate with the good and bad experiences that Matthew Paul Turner recounts. For me, Hear No Evil was a very enjoyable and encouraging read.

Thanks to Random House & Matthew Paul Turner, I am giving away a copy of Hear No Evil here on the blog.

If you would like to win a copy, you can do one of two things:
1. Leave a comment, preferably with your weirdest church experience.
Or
2. Retweet my tweet on twitter regarding this post.
(make sure to retweet using @garydurbin, so I'll see it, and use the hashtag #HearNoEvil.)

DO BOTH OF THESE AND RECEIVE 2 ENTRIES INTO THE DRAWING

I never had any Barbie doll burning moments like in Unchurched, but I do remember quite a lot of stuff I laugh at now. I grew up at the end of an era where the holiest Baptist churches had words like Independent, Fundamental, or Bible in their name. You get an awesome mansion in heaven if you had all three. Everyone was a Republican and they did not like Catholics, Presbyterians, or even other Baptist churches, like Southern Baptist. These sects were often the butt of jokes and entire lessons were taught on how to 'combat" them. I look back now and realize I had the right heart, but was in the wrong place. These are just a few of the weird things I remember coming from a Independent, Bible Believing, King James church.

One more thing, you can make a lot of money, if you are a singing southern gospel family that goes from church to church collecting "love offerings" and wearing nice suits and dresses. I will have to check this book out.

once, while working at a church, I was told that the ministry i was in charge of lacked validity because it and this is a direct quote "did not bring in the amount of donations that choir performances did"

this book sounds right up my alley...

I remember sitting in the bedroom of a friend who was going through his record collection in preparation for his youth group's record smashing event. He simply culled out all the records he no longer liked, leaving the core of his collection intact (though hidden in a box in the back of his closet). This was a basic survival technique of those of us in fundy youth groups in the 70s. You wanted to remain part of the group (mostly because all your friends were there), so every once in a while you publicly "made a decision" then threw a token sacrifice into the fire to maintain group cred.

When I was in college, I still lived with my parents and attended a Southern Baptist church that was pretty much dead. There were no other college-aged people there. On Sunday nights, I would go for the Bible study hour prior to evening worship, but I would just sit by myself and read a book. I went through a big Ayn Rand phase, and had a copy of The Fountainhead with me one Sunday evening. (I know: not something one is likely to see in a Southern Baptist church.) There was this very religious, moralistic woman that attended there. She noticed me reading the book, and asked me about it. As I told her about it (somewhat ignorantly) I could see her expression change from one of feigned interest to shock and disgust. She then made it her mission to "reform" me, I suppose. She warned my parents about the dangerous material I was reading (and at such an impressionable age!). She also took it upon herself to bring me reading material she considered more appropriate.

This probably isn't the kind of "weird church story" you wanted. But, I was at a super strict Baptist church. The entire morning was really intense, until right at the end of the morning, when the annoucements were closed with "Special thanks to our clown ministry..." I don't remember what the sermon was about now, but I definitely remember that.

I don't really have any "weird" stories. It was just an eye opener being a Catholic who grew up a navy brat who went to a non- denominational church to go to a independent Bible Baptist church. Things were different....waaayy different.

This is actually more of a funny story about me. I am a staff pastor at my church, ministering to students at the College in our town, and so I am used to using off-handed references to relate the gospel to these students. One Sunday as I was preaching in the regular Sunday Service, I was talking about how God doesn't condemn us but is constantly there helping us back up after we sin. I made the comment that God is like a cheerleader in that regards, then proceeded to "think out loud" and say: but I wouldn't want to see Him in a tu-tu.
My church still teases about that today.

Your post reminds me of working on a Christian college campus. At one point the campus lake had to be emptied for some work...and lo and behold in the mud on the bottom were numerous secular CDs. I remember one in particular was Metallica...but when I rinsed it off even though it looked shiny I couldn't get it to play....bummer.

no funny stories. just painful.
I remember Sketch Erickson enciting every fundi kid to burn all their evil rock records....
I really want this book.
Thanks for the chance!

Would love to win!

Weirdest things I've experienced are people who will literally push/pull someone down in an attempt to have them "fall" from being overcome by the Holy Spirit. WEIRD.

When you retweet, make sure to use my name, @garydurbin, so I'll see it and use the hastag #HearNoEvil. Thanks for the comments. Great stuff.

Growing up (Southern Baptist) there were certain lines in worships songs that were sung in my church that my mom didn't find theologically accurate, so she would just stop singing when those lines came, and purse her lips together and look righteously indignant for a few seconds, and then start singing again once it came to an okay part. It was really funny to watch :)