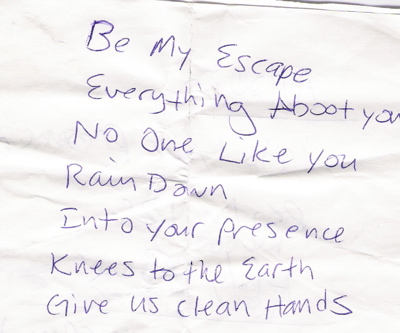 Yesterday, I was sitting in the waiting room at the doctor's office. I started thinking and praying about the songs we should sing at church that week, and God gave me this thought: "The best worship sets happen when God picks the songs, and we sing them to Him."
I'm sure most worship leaders have listened to a live worship album, and gotten the goose bumps after hearing the reaction of the crowd, and how much God is obviously moving during a song. As a worship leader, I get inspired by that. That's what I want for our church. I want a movement of God that overflows in the hearts of the people. So, naturally, I feel inspired to do that song at our church. I want our church to experience the feeling that I felt when I first heard that song. Then it happens. I put it on the set list. I have the praise band practice it rigorously, and then comes Sunday. We introduce the song, and instead of seeing raised hands and people overflowing with praise, I see people who look like they've just seen a UFO. In a way, they have. The song was an unidentified object flying right over their head. In short, they didn't get it, probably because they weren't ready for it. Have you been there? I have more than a few times, but the more I learn about worship leading, the less it happens, and here's why.

I've learned that the best worship sets happen when God picks the songs, and we sing them to Him. This is an aspect of God that we cannot possibly comprehend. Only God could tell us to do songs that are, in turn, going to be sung to him, and still have pure motives in it. If we sat down and picked out some songs that would bring praise to ourselves, the pride inside would be unmeasurable. Again, only our holy God could do this, and He does. I've learned, the hard way, that God knows what songs the church needs to sing to Him every week much more than I do, or anyone for that matter. When we obey God in our life of worship, He actually blesses us. When we do we want to do, instead of what God wants, we rob ourselves of a huge blessing.

I've found that I get off track, because of pressure. When I find a new song, and see the impact it is making, I subconsciously start putting pressure on myself to bring the impact of that song to my local congregation. Before I know it, I've got it in the line-up, and if it doesn't live up to my expectations, it becomes a downer in, what's supposed to be, a worship service. Why did this happen? It happened because I never asked God if that song was to be sung in our church. Am I saying that we should pray about every song that we bring before our church? Absolutely, that's what I'm saying, because the best worship sets happen when God picks the songs, and we sing them to Him.

There's another pressure that worship leaders experience as well. It's the pressure of song requests. If you've been a worship leader for a while, or even a little while, I'm sure you've gotten some song requests. I've gotten all kinds from all ages. I've had the younger requesting the new, and the older requesting, well, the old. The older crowd's request is actually an easier issue for me, because I know where they are coming from. They want to sing the songs they've sung for years. Songs that they truly love. The younger crowd is a little more complicated for me, because I actually like the songs they're requesting. There's definitely more of a pressure in that for me. Both sides, for the most part, are requesting because they are inspired by songs just like we, as worship leaders are. One time, an older man decides to approach me with a request, 2 minutes before the service started, of course. He asked me if I knew any "Baptist Anthems". I was like, "Huh?" He said, "You know, 'How Great Thou Art', 'I'll Fly Away'...songs like that." I said, "Yeah, I know those songs." He said, "Well can you do more of those?" I leaned into him close and said, real softly with a smile, "You know what I'm gonna do?" He said, "What?" I said, "Whatever songs God wants me to do." I really meant that, and I was hoping that would teach him or help him in the process. He then said, "Right, right.......but, can you do some of those songs?" He obviously didn't get it. As a worship leader, we're going to face some outside pressure.

I'm not saying that we should stop listening to song requests, because sometimes God uses people to speak to us. The main thing is that we stay obedient to God and God alone. It's easy to get caught up in trying to please everyone. We even try to make it spiritual and say that we are being a blessing to people, but that's our own illusion. The blessing comes when we're obedient to God. It's much better to be in the will of God, rather than to be current, hip, or in the good graces of your people. A verse that really confirmed this for me early on was Galatians 1:10, "Am I now trying to win the approval of men, or of God? Or am I trying to please men? If I were still trying to please men, I would not be a servant of Christ." (niv)

There's been so many weeks that I've battled those pressures as I am compiling the set list. There will be songs that I really want to do, but God just won't give me peace about it. I've learned to yield to God in those situations, because I've experienced the consequences of not listening to Him. In turn, I've also experienced the blessings of obedience during a worship service. There's nothing like seeing God move in a worship service. Success comes in a worship service when we obey God's voice, because the best worship sets happen when God picks the songs, and we sing them to Him.

All the time! It's so easy to start relying on our own skills, knowledge, or preferences when arranging sets. I find that pride builds up in me and until eventually I find myself more excited about the amazing arrangement of XYZ Song that we're going to do (it starts with dualing guitar solos and lots of crash cymbal!) than about the spiritual content of the service. After I've reached that point, I usually need to see the song or arrangement totally fail to bring me back to my senses.

Relying on God's inspiration for sets also keeps us from falling into ruts. Sometimes I find myself bored with the sets we're picking. It's usually a good sign that I'm picking songs based on "what we know" or "what's worked before" rather than what God's actually doing in our congregation.

As always, it's so important that we spend time hearing from God and worshipping Him alone. It's from those times that our congregational worship should flow!