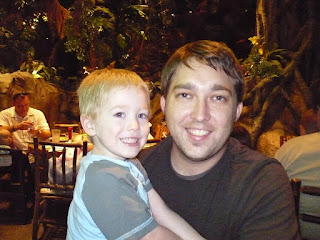 When I was getting my son ready for school this morning, he was arguing with me about doing something. Lately, I've been using the whole "be a big boy" thing with him, and it works sometimes. So, this morning, when he didn't want to do the thing I was telling him, he immediately said, "I want to be small". I said, "What?", and he said, "I don't want to be big, I want to be small". I then said, "You are small. I'm big and you're small, so do what I told you to do." He stomped off and I went and took a shower.
It got me thinking about our relationship with God. He's big, and we're small, compared to him. Comparatively speaking, we are bigger, and sometimes we're smaller. Right now, I can tell my son that I am big and he is small, but at the rate he's growing, I probably will only enjoy that luxury for another 15 years or so. Perspective can be everything sometimes, and especially in our awareness of God. God is big, and we are small. That's a non-negotiable fact. It's truth. The wrong approach to spirituality is trying to become smaller than God. It's not becoming small, it's about realizing how small we really are. I think one of the biggest flaws in a personality is no self-awareness. It can really be annoying for everyone around you, and it deeply hinders your chances of self-improvement. The best self-awareness we can have is that we are small, and God is big, really big.
Interestingly, though, John the baptist said, "He must become greater, and I must become less."(John 3:30 paraphrased) John wasn't trying to become smaller, he was trying to get his followers to see that he was small, and that Jesus was big. In this case, John's correct self-awareness led to steering the people towards God, and that's the only kind of leader that I want to be.
John is still talking to us today with those words. God is big, and we are small. My son finds security in the fact that I'm bigger than him right now. One day, I'll be smaller than him, and as a parent that truly believes, my most important lesson to teach him is that God is bigger, even when he grows to become bigger than me.

Josh told me the same thing the other week in the nursery. He kept fussing at me about Hunter and when I said that big boys don't fuss he told me that.